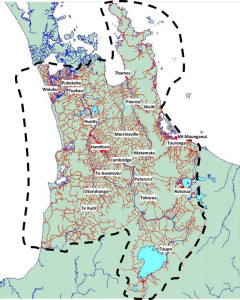 The Waikato Regional Transportation Model (WRTM) is a multi-modal strategic model that converts input land use (population, households, employment, etc) and a description of the transport network (road and public transport) to forecast travel patterns for any year by mode (car drivers, car passengers, public transport passengers, walkers/cyclists).  Heavy vehicle trips are also forecast, albeit using a relatively simple approach.  These types of model, referred to as a three or four stage/step models, are used throughout the world and were first implemented in the 1950s.  The WRTM therefore adopts a traditional, tried-and-tested analytical approach to estimating future year travel demands.

The WRTM covers a large geographic area which includes all of the Waikato, much of the Bay of Plenty, and the southern part of the Auckland Region. It was originally developed between 2007 and 2010 and has since been checked and confirmed as appropriate based on the 2013 Census.

The WRTM is the single recognised strategic transport model in the Waikato Region, and is invaluable as a strategic planning tool for forecasting changes in travel demands based on:

The purpose of the model is to enable integrated planning of land use and transport proposals to be analysed, and possible changes in policies to be evaluated.  Specifically the WRTM can assist with:

The WRTM is a strategic regional transport planning tool, that has both three and four stage model components.  The three stage WRTM forecasts vehicle trips only (with no mode choice), while the four stage WRTM forecasts person trips including the choice of travelling by car, bus, or active mode.  Some outputs of the WRTM have not been verified and, therefore, require further checking prior to use.  These outputs include turning movements at intersections, traffic flows on local roads, and details of specific walking/cycling trips.

The model currently produces outputs for the following periods for an average weekday (March):

Both the three (vehicles) and four (persons) stage models have been calibrated, validated, and the base year outputs (2006 and 2013) confirmed as appropriate for a strategic model by an independent peer review.  Forecasts from the three stage model have also been produced and independently reviewed.  As of September 2019, forecasts have not been produced from the four stage model, meaning outputs have not been verified.  The four stage model is ready to be applied once the assumptions on the future public transport system are provided.

The WRTM is owned by Waikato Local Authority Shared Services Limited (WLASS); a Council controlled organisation that delivers council services in a collaborative shared manner across the Waikato Region.  The WRTM can be applied to assess the impact of private developments.  Engagement is through Dawn Inglis (Manager, Waikato Road Asset Technical Accord (RATA)), who is the WRTM’s project manager on behalf of WLASS and is the first point of contact for access to the WRTM.